Observing the Sun can be dangerous if not done correctly. Never look at the Sun directly. Even when it is low on the horizon and doesn’t appear to be dangerously bright, it is hazardous. When the sunlight passes through a lot of atmosphere, as it does when it is near the horizon, the blue light is scattered, so less overall light reaches you. But the red and infrared light passes through relatively undimmed and can harm your eyes. So do NOT ever look at the Sun. Use one of the safe techniques mentioned below.

What is a Transit?

Two planets – Venus and Mercury – have orbits that lie inside Earth’s orbit around the Sun. When one of these planets passes between the Earth and the Sun it is called an inferior conjunction. When this alignment of the Sun, Earth, and either Mercury or Venus is nearly perfect, we can observe Mercury or Venus as they move across the face of the Sun. This is called a transit.

What is an Astronomical Unit?

The Astronomical Unit is a measurement that astronomers use to measure distances within the solar system. One AU is the mean distance from the center of the Earth to the center of the Sun. This distance was most recently defined in 2012 by the International Astronomical Union to be 92,955,807.27 miles (149,597,870.7 kilometers).  We will be using this value and other information from the transit to determine characteristics of the Sun, Mercury, and Mercury's obit.

There are many assumptions and approximations in this process. Your results will vary depending on errors that creep into the process due to factors such as these:

Information on the Planetary Transit: Mercury 2019

The next planet to transit the sun is the planet Mercury on November 11, 2019. Details on transits are available from NASA on this site: http://eclipse.gsfc.nasa.gov/transit/transit.html. For information about this specific transit, click here.

Mercury is small and so far from Earth and its silhouette is visible only with magnification, but be sure to use proper filters to protect your eyes.

(The next transit after this one is the planet Mercury on November 13, 2032. Mark your calendar.)

How to Safely Observe the Transit

Observing the Sun can be very dangerous. Be very careful. Never look at the Sun without proper filters. A safe filter must filter 99.999% of the sunlight at visible as well as invisible wavelengths (infrared and ultraviolet). Damage can be immediate and permanent!

Option 1: Pinhole Projection. This is a great, low-tech way to watch the event. It lets multiple people see it at the same time. Do NOT look through the hole at the Sun. Put a small pinhole in the center of a card. Let the light coming through the hole hit a large white card or piece of paper about 3 feet away.

Option 2: Eyepiece Projection. This technique will work for a small telescope or a pair of binoculars mounted on a tripod. Do NOT look through the binoculars or the telescope when it is pointed near the sun! Do NOT do this with a large telescope, the optics may overheat and be permanently damaged. If you are using binoculars, cover one of the objective lenses. Point the equipment at the Sun. Then hold up a white card or piece of paper so that the light coming out of the eyepiece is projected onto the paper.

Option 3: Solar Sunglasses. Because of Mercury's tiny angular diameter its disk will NOT be visible through Solar Sunglasses. These sunglasses are easily available on the internet and will be available in local stores as the time draws near. Once you have them, check to be sure that there is no damage. Put them on, and look at a bright incandescent light bulb. You should be able to see the glowing filament. Make sure that there are no cracks, creases, or pinholes. Even a small pinhole will let in a potentially dangerous amount of light from the Sun.  It you see any damage at all, do NOT use them. Also note that there are NO sunglasses that are safe for looking at the sun.

Option 4: Binoculars or a Telescope with a Solar Filter. They should have a filter at the front end of them. Do NOT use solar filters that attach at the eyepiece end. Make sure that there is no damage on the filter before you use it. Be sure to cover the finder scope.

Option 5: A Solar Telescope. These are telescopes specifically designed for observing the sun usually at specific wavelengths (e.g. H-alpha – 656.3 nm, Calcium K – 393.4nm). I believe that the view in a standard telescope with a standard solar filter will be more pleasing.

Option 6: Shade #14 Welder’s Glass. Because of Mercury's tiny angular diameter its disk will NOT be visible through Welder's Glass. It is critical that you use shade #14 or higher. The higher number the more filtering. If you are unable to get the shade #14 welder’s glass, then we recommend that you use one of the projection methods (options 1 or 2 above). If you combine more than one piece, your total must be higher than 14. Two pieces should total 15. Three should total 16. If you use more than one piece, tape them together so that you will always be sure to be looking through all of the filtering. A higher number is always better.

What we will attempt to calculate are:

There are many factors that must be taken into account to accurately calculate these values.  We are going to make some simplifying assumptions to do these calculations based on the limited information our observations will collect.  We know that these will have a significant impact the accuracy of our results.

Some of these assumptions are:

A brief note on eccentricity (or ellipticity).  Eccentricity is a measure of the degree to which an ellipse is not a perfect circle.  These are the values of eccentricity for planet shapes or orbits:

Note: For planet shapes we look at oblateness, but the concept is very similar.  The flattening (f) can be calculated using this formula:     f = (a - b) / a     where is the equatorial diameter and b is the polar diameter.

Step 1: Calculate the oblateness of the Sun:  based on the full-disk image of the Sun

Step 2: Calculate the oblateness of the planet Mercury: based on the full disk image of Mercury 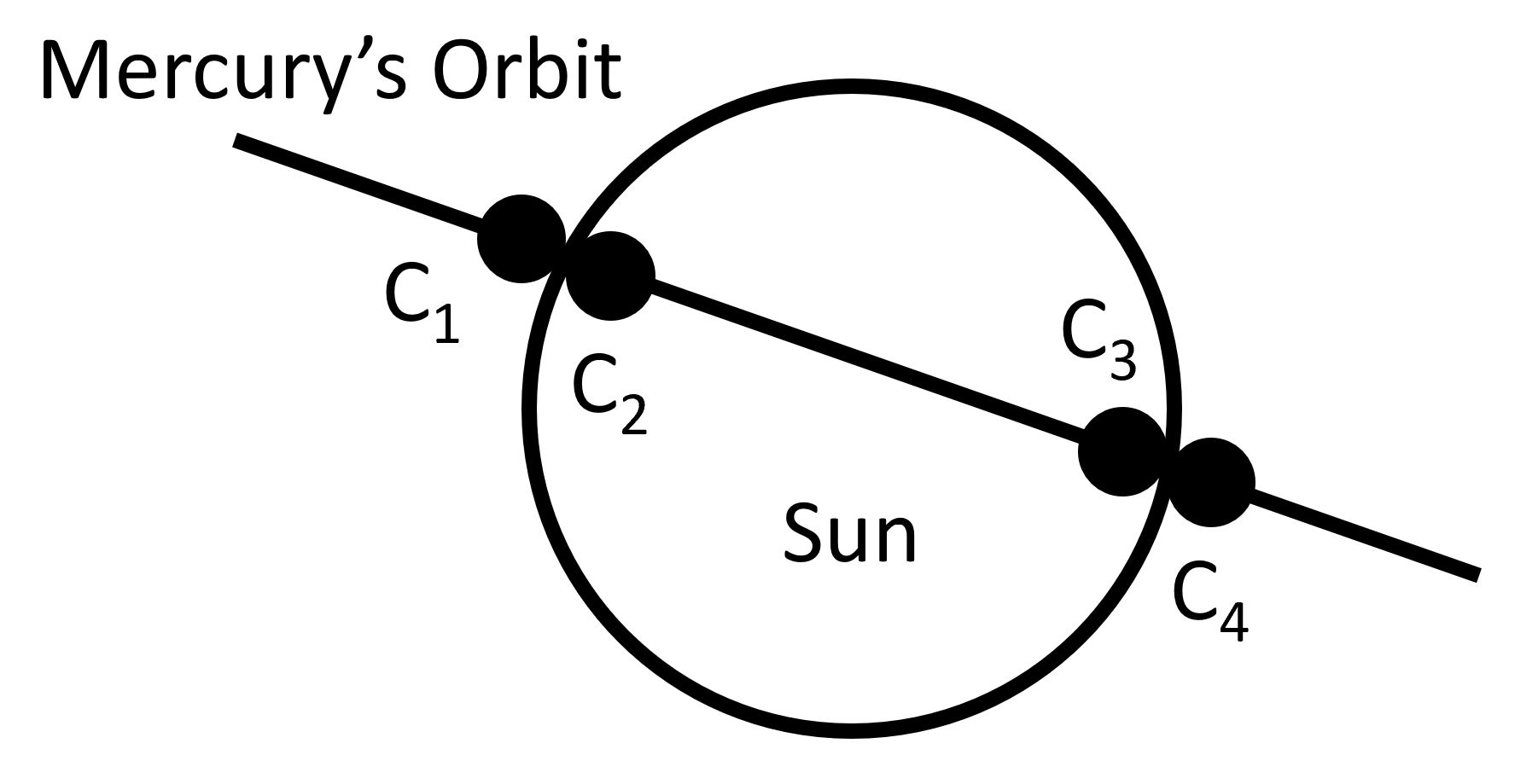 Step 6: Some questions to be answered

Submitting Your Results to the AL Coordinator

The Coordinator must receive submissions for this program no later than December 11, 2019. There will be no exceptions. A certificate and a pin will be awarded to those Astronomical League members who participate.