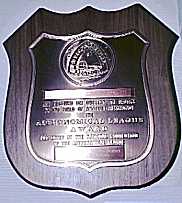 The Astronomical League Award is presented to any person, either amateur or professional, who has made worthwhile contributions to the science of astronomy on a national or international level. Previous winners have made contributions to the science of astronomy, founded other astronomical organizations, or made great contributions of their time and energy to the Astronomical League. Current officers of the League (until they are out of office for one year) or current members of the award committee are not eligible for this award.

The award committee consists of the current president, the immediate past president and the second past president, all of whom must vote on the award. The selection of the award recipient must be unanimous. Nomination must be made in writing to the Executive Secretary and contain the affiliation with the League (if any), and the reasons the person should be considered for the award. It must be received at least four months before the national convention. Announcement of the winner is made annually and the award is usually presented at the banquet held at the national convention.

The award need not be given each year. It may be given to more than one person or more than one award may be given in a year. The award may be posthumous. Qualified nominations need not be acted upon in the year in which they are received but may be held for future consideration. No reasons will be furnished for not making the award to any person nor are the proceedings of the presidents' committee be made public. The committee may nominate additional names.

The idea behind the Astronomical League Award is to provide public recognition of outstanding work in the fields of amateur astronomy. By having the recipients describe their work at the annual conventions, the winner can transmit to all of us some of his enthusiasm and knowledge. Qualifications you should consider in suggesting nominees are as follows:

Winners of the Astronomical League Award