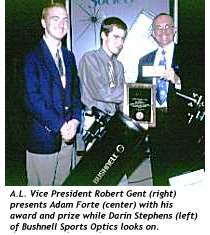 Our winner is Adam Forte, of Virginia Beach, Virginia. Adam is a sophomore at Ocean Lakes High School in Virginia Beach. He has spent much time at the telescope promoting astronomy, he is a talented observer, and he is a most enthusiastic astronomer. In fact, Adam epitomizes the term, exceptional service by a young astronomer. At ALCON, he received a $1,000 check presented by Mr. Jack Horkheimer. In addition, he received an expenses-paid trip to the Astronomical League's annual convention in Cheney, Washington last month, and he received other prizes including a membership to the International Dark-Sky Association.

As the Vice-President of the Back Bay Amateur Astronomers, Adam provides outstanding service in astronomy. Kent Blackwell, the president of the BBAA, describes Adam's enthusiasm, "Various club members set up telescopes to teach children about astronomy, but it's through Adam's efforts that the kids seem to learn the most. In these kid's minds, we adults remind them of teachers or parents, but they think of Adam as one of their own."

Adam has a long list of outstanding achievements. Last year, he won an Award of Honor from the Virginia Academy of Science for his outstanding achievements. In an effort to raise awareness about light pollution, Adam conducted a limiting magnitude project for the Tidewater area. Adam is energetic and talented officer of the BBAA, a member society of the Astronomical League.

Our first runner-up is Sloane Wiktorowicz, a senior at Santa Teresa High School in San Jose, California. During the summer of 1996, he spent three weeks at the Lick Observatory as a volunteer. During the day, he reorganized photographic plates and also inventoried unexposed plates. By night, he observed with professional planetary astronomers.

Earlier this year, he won an award as outstanding senior mathematics student, and scored 800 out of 800 possible on his SAT math test. Sloane observes the night skies with his 4.5-inch Newtonian, and is now observing with the San Jose Astronomical Association's 8-inch Schmidt-Cassegrain telescope. He submitted an extensive log and drawings of planetary observation reports. Sloane reports to us that he has a burning passion to become an astronomer.