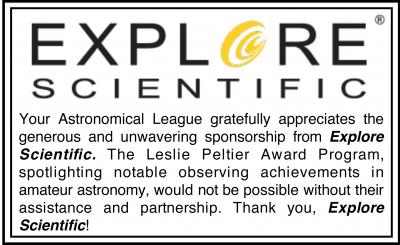 The heart of amateur astronomy is observing. We can read all we want about astronomical phenomena, but the real joy in astronomy is going out under the night sky and observing the objects about which we have read. But while most of us are casual observers of the sky, looking at the same few objects over and over, a few amateur astronomers develop their observing skills to the ultimate degree. They then use these skills to make careful observations of the sky and record them for scientific analysis. Peltier Award Plaque
Whether the observation is done with a photometer, CCD, spectroscope, or just the human eye, the ability to find an object and record scientifically useful detail is not a common trait. To recognize the amateur astronomer who is not only able to do this, but has contributed their observations to an ongoing observing program, the Astronomical League presents the Leslie C. Peltier Award. The Peltier Award was created in 1980 and the first was awarded in 1981. 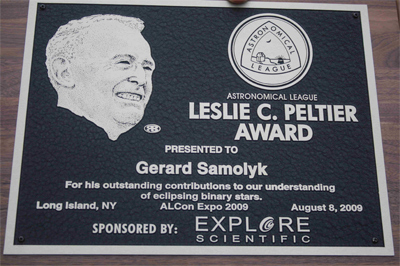 The award is named after Leslie C. Peltier, the Delphos, Ohio, amateur astronomer who Harlow Shapley, one of the League's founders, referred to as "the world's greatest nonprofessional astronomer". Born January 2, 1900, he discovered twelve new comets and four novae. But his real contribution was the over 132,000 variable star observations he made in his sixty-two year observing career. He also wrote many articles on astronomy and penned four books. To easy his observing, he built an enclosed "merry-go-round" observatory. He died in 1980.
It is in his memory, and to celebrate his life-long love of the heavens, that the Astronomical League presents the Leslie C. Peltier Award.

The League shall present an annual Leslie C. Peltier Award to an amateur astronomer who contributed to astronomy observations of lasting significance.
Procedure for Nomination.
1. A three (3) person Peltier Award Committee shall be established, which shall execute the nomination and selection process, and shall be responsible for the design and sponsorship of the representative plaque.
2. Nominations shall be sent to the committee chair, who will forward the name(s) to the committee members for their selection by simple majority vote. The committee chair shall maintain a permanent list of nominees not selected, for consideration in future years.
3. Dates for the implementation of this process shall be set by the committee. The award shall be presented at the banquet of the annual convention or, if none is held, at the largest gathering of League members at the convention.