The name of this star may seem somewhat familiar. There’s another star in the sky named Deneb, in the constellation Cygnus (the swan). The name Deneb is from the Arabic word dhaneb which means ‘the tail’.  The name Denebola is a combination of the Arabic words Deneb Alased, meaning the tail of the Lion, which, in fact it is. It lies at the eastern end of the constellation Leo the Lion.

The Bayer designation of β might lead you to believe that this is the second brightest star in the constellation, but not so. Regulus (α Leo) is the brightest and Algeiba (γ Leo) is the second brightest. What’s up? When Johann Bayer assigned these designations to stars in the early 1600’s estimating magnitudes was not something that could be done precisely. Bayer also made assignments based on the rise time of the star and other criteria.

His star atlas was titled Uranometria and the name derives from “Uranos”, a Greek word for ‘sky’ and “metria” (measurement).

Observations reveal that this star has a disk of dust surrounding the star. Are there extrasolar planets here? Maybe. This disk has been confirmed by images by the Herschel Space Telescope. Another effect of the surrounding material is that the spectra of the system show radiation in the infrared, mostly from this dust disk being heated by the star.

This star is considerably hotter than our Sun. At its surface (the photosphere) the temperature is estimated to be 8500 K (Kelvin) compared to our Sun’s temperature of 5800 K. Since color and temperature of stars are related (hotter stars are bluer than cooler stars) this star is ‘whiter’ than the Sun which is a G2V star.

Hotter stars have a shorter lifetime than cooler stars. Denebola is a young star having been on the main sequence for 400 million years. Most of any star’s life is on the main sequence after a relatively quick birth process. The end of life of stars is rather rapid as well.

Another interesting thing about this star is that it is variable, but only ever so slightly, about .07 magnitude, far too small to detect visually, but not too small to detect photometrically. This variability in magnitude is at visual wavelengths, meaning that it would be in the visual part of the spectrum. A ‘V’ filter on a telescope is used to make an imager (CCD) respond to light in a way similar to the way the eye responds to light. Interestingly enough, the eye is most sensitive to green light and a ‘V’ filter looks green. 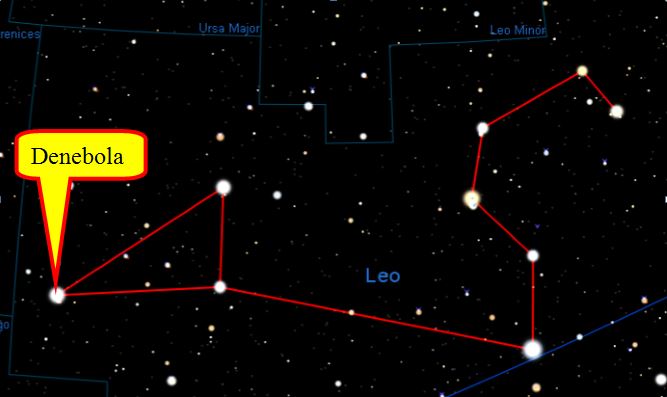 Finder chart above— north is up