You might be surprised to find out that the ‘Sunspot number’ for any given day is not simply a count of the number of visible sunspots. As with many things in science, it’s not that simple. The sunspot number is calculated using the simple equation:

S = the count of all sunspots in all groups

K = a scaling number to compensate for variables (see text).

This method was suggested by Rudolph Wolf in 1848, and it’s also called the Zurich sunspot number and the International Sunspot Number. The fact that there’s a ‘fudge factor’ (K) associated with the calculation of the sunspot number should cause concern. This factor is meant to normalize the data from various observers using different methods for counting sunspots. As time has gone on new official observers have come and gone, new equipment has been developed, and new techniques have been used to count sunspots. The goal is to make historical data and new data match so long-term trends in the sunspot number can be studied.

A newer method came out in the mid 1990’s at meetings of solar scientists. The new method simply counts the sunspot groups observed, and doesn’t attempt to count the individual sunspots. Counting sunspots can be problematic because some of the features on the Sun are hard to classify. A feature called a ‘pore’ usually corresponds to a single, dark, granule of the Sun, but may be indicative of a newly forming sunspot. Some judgement of the observer is involved.

The method that counts groups was developed by Douglas Hoyt and Kenneth Schatten as a way to make old observations (data) match more recent data. This method needed its own ‘fudge’ factor to make the data closely match the results using the Wolf method. This factor turned out to be 12. The results were an excellent match for the Wolf numbers and the observations using this method were less subjective.

You can find information on the sunspot number at www.spaceweather.com. Look at the column at the left edge of the page to see the NOAA sunspot number, which is computed using the Wolf method.  NOAA suggests that if you divide the sunspot number by 15 you will get a number that represents the number of sunspots you’d see by projecting the image of the Sun onto a white screen. Today (9/15/16), the sunspot number is 14, so you’d expect to see one via eyepiece projection.

Sunspots come and go, and we’re on the down slope of the 11-year sunspot cycle. You can observe sunspots in any one of various ways, but observing the Sun safely is of prime importance. How to observe safely has been described in many books and articles. Here are links to two articles on the subject.

References: The Sun and How to Observe it by Jamey Jenkins. Your Guide to the 2017 Total Solar Eclipse by Michael Bakich. The New Sunspot Numbers, Carl Luetzelschwab, QST Magazine, October 2106. 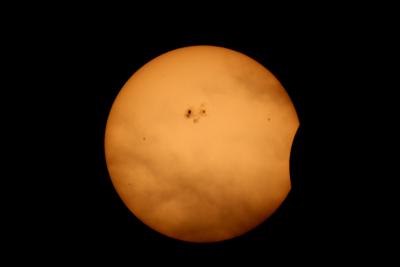 October 23, 2014. Image of the Sun showing at least 4 sunspot groups. The notch taken out of the Sun at the right of the image represents a (very) partial solar eclipse seen in Houston on that day. The eclipse was not total anywhere on Earth. The cloudy areas near the top and the bottom of the image are, in fact, clouds. Credit: Bill Pellerin