When you think about the pioneers in astronomy,  the name Grote Reber does not generally come to mind. Yet, it is Grote Reber who was one of the early observers of the sky at radio frequencies. 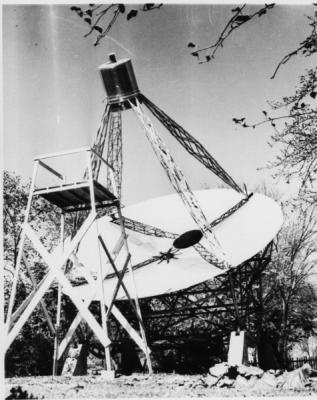 Radio astronomer Grote Reber was born in 1911 and died in 2002, just two days shy of his 91st birthday. He was an electrical engineering graduate of what is now known as the Illinois Institute of Technology and an amateur radio operator with the call sign W9GFZ. That amateur radio call sign is now owned by the National Radio Astronomy Observatory Amateur Radio Club in Socorro, NM.

A personal note – on August 28, 2000 I made contact with W9GFZ via ham radio on the event of the dedication of the Green Bank (WV) radio telescope and I have a confirming postcard from that day as a souvenir.

Mr. Reber’s work in radio astronomy is only preceded by Karl Jansky’s work. Jansky was working for Bell Telephone Labs on a project to determine sources of interference in transcontinental cable systems. In completing this work, Jansky discovered a radio signal that was associated with the Milky Way, and was, as might be expected, strongest in the Sagittarius constellation – the center of the Milky Way galaxy. Jansky was not authorized by his employer to continue the investigation of the radio signals from space so his work on the subject was completed once radio sources that would interfere with cable communications were identified. The radio signals from space were too weak to affect cable communications.

Grote Reber, hearing of Jansky’s work, applied to work at Bell Labs in 1933, but this was during the depression and no job was available. Undaunted, Mr. Reber personally funded and built his own radio telescope, a 31 foot dish, at his home in Wheaton, Illinois. He had contacted a construction company about building the dish for him, but the cost would have been $7000. This was in 1936; adjusted for inflation the cost would have been over $110,000 today. This was out of the question, so he built the antenna himself, at his own expense, in four months. He spent $1300 (over $23,000 today) of his own money on the project. The finished antenna was considered to be the first radio telescope – designed and built to examine radio signals from space.

With the electronics built and the observing program designed, and after a couple of false starts (he initially chose the wrong frequencies to monitor), Grote Reber began his observing program in 1939. Every evening, after work, he would monitor the output of the system and record the results on paper charts. He produced a map of the sky showing the parts of the sky that were ‘bright’ at radio frequencies and confirmed Jansky’s results. These results were ultimately published as radio ‘brightness’ contour diagrams in the Astrophysical Journal and in Sky and Telescope magazine, April 1949. The Sky and Telescope article is interesting. In this article, Reber calls radio astronomy a “borderline science” but then goes on to discuss the meaning of the relative intensity of radio signals in various parts of the Milky Way. He comments that the radio profile in Sagittarius is “quite complex” and he concludes the article by suggesting that more surveys are needed at other radio frequencies and that a dedicated radio telescope near the equator could make a significant contribution to the science.

The interesting thing is that for 10 years, Reber was the only one looking at the sky at radio wavelengths. Following the publication of his results, he began to get noticed, and was hired at the University of Virginia. His telescope was moved to Green Bank, WV in the 1960’s and it is there today.

Reber then went to Hawaii to continue his work in a less noisy radio environment. From there, for the last 50 years of his life, he lived in Tasmania (off the southeast coast of Australia). Tasmania provided a even quieter radio environment, especially on long winter nights.

He never accepted the idea of an expanding universe and the concept of the Big Bang and published a paper about the ‘Stable Universe’.

If you find yourself in Cambridge, Tasmania, drop by the Grote Reber Museum.