Single Arch—This is one of the most common shapes of a prominence, representing charged solar material flowing up from the solar atmosphere and down again following local magnetic field lines.

Double Arch—Much rarer than a single arch, this has two arches that are connected to each other via a center stream of material.

Broken Arch—Likely to be an evolutionary stage of a single arch, a broken arch features gaps in the stream of material where the plasma density is either too low to be detected, or the material has been blown away or disrupted by solar wind streams.

Unconnected Arch—This is where one end of the arch has not reconnected to the solar surface. This is also likely to be an evolutionary stage of the single arch, where the material is still travelling down the magnetic field lines to the surface.

Straight Pillar—This appears as an eruption vertically up from the solar surface, and is quite common. It could also be an arch seen edge-on.

Curved Pillar—This is simply a pillar that is bent out of shape by magnetic or other forces, and could also be the early stages of an arch seen at an angle.

Inclined Pillar—This is where the material at the base of the eruption and throughout the prominence is at a significant angle to the surface.

Mound—This is also a fairly common type of prominence, and is seen as a relatively but fairly low eruption. It has a width equal to or greater than its height.

Hedgerow—This is a grouping of many smaller prominences that are likely to have come from the same source of activity.

Pyramid—This common type is like a combination of a pillar and a mound, typically featuring a wide base that converges to a fairly sharp point.

Broken Pyramid—This is a pyramid that has some damage in the form of holes in the plasma stream, or whole sections of plasma that have broken off. It is also likely to be an evolutionary stage of a regular pyramid.

Fork—This is two prominences, typically of pyramid or pillar form, that are very close together. The width between them is usually less than the base width of the thinnest prominence.

Detached—Here the material has lifted off the surface entirely, and appears to be completely disconnected from the surface. It is possible that some low density interconnecting material is there, but is not detectable with the observer’s equipment. 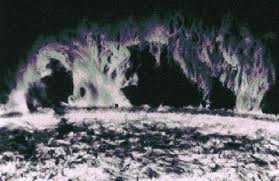 Anomalous—As is to be expected with any classification system, there are prominences that have no discernable shape or features than can place them in a distinct category. Due to the random and very complicated nature of solar surface eruptions and magnetic fields, these kinds of prominences are relatively common.

In the third set, you will make detailed sketches or images of individual features on the disk of the Chromospheric Sun, which MUST include six of the following nine features:

Spicules—Small jets of gas under 10,000 km high, usually seen as a mass of tiny brighter spike-like features on the limb or as tiny darker spikes coming out of network elements. 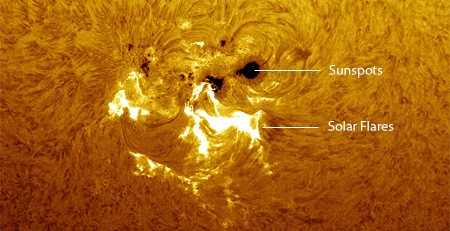 Flares—Intense, abrupt releases of energy which occur in areas where the local magnetic field is rapidly realigning or changing because of magnetic field stress.

Elerman Bombs—Micro solar flares that appear as tiny fairly bright transient points of light (usually less than 5 arc minutes), most often found in Emerging Flux Regions or on edges of sunspots where the magnetic field is breaking the surface. Also known as a Severny moustache. 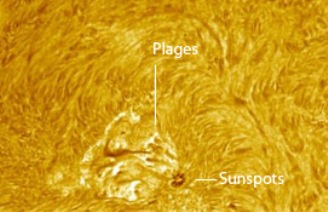 Plage—Patchy H-alpha brightenings on the solar disk, usually found in or near active regions, which can last for several days. Plage is irregular in shape and variable in brightness, marking areas of nearly vertical emerging or reconnecting magnetic field lines. 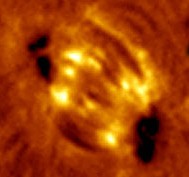 Emerging Flux Region—An area on the Sun where a magnetic dipole, or flux tube is surfacing on the disk, eventually producing a bipolar sunspot group. Each pole of an EFR is often marked by pores or small developing sunspots. Growth is rapid, forming in just a few hours. 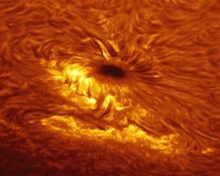 Sunspots—Temporary phenomena that appear visibly as dark spots compared to surrounding regions. They are caused by intense magnetic activity, which inhibits convection, forming areas of reduced surface temperature. Although normally a white light phenomena, they do appear in H-alpha, but their penumbrae are lower in contrast than in white light. 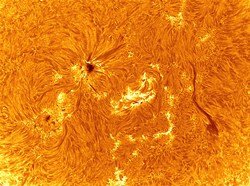 Active Region—A localized, transient volume of the solar atmosphere in which plages, sunspots, filaments, flares, etc., may be observed. Active regions are the result of enhanced magnetic fields; they are bipolar and may be complex if the region contains two or more bipolar groups.

Please note that artistic talent is not required to complete the program. Just diagram what you see as well as your ability allows. Use a number 2A lead pencil for best results. Work quickly as you can since changes can occur within minutes. On the whole disk recording form mark sunspots as small or large round black dots. Filaments should be drawn using short or long, narrow or wide black lines shaped as they appear to the eye. Plages and flares may be drawn with closed lines without shading. Limb prominences may be drawn with a shaded black outline. See sample drawings for examples. The focus of your drawings should be on the position, shape and size of the features. Remember to label each feature in your drawings/images.

The Observing Program should be achievable with modest Ha equipment, such as the Coronado Personal Telescope (PST) and the like. Double stacking of filters is desirable to bring out greater detail in the surface of the Chromosphere.

Seeing conditions for Ha observing can be carried out by looking at the sharpness of the chromospheric network, spicules (chromospheric edge) and filaments using the following scale:

5—Near-perfect image. The details in the chromospheric network are well visible over the entire solar disk. There are no vibrations at the solar edge. Even the finest spicules are visible at the solar edge. The fine structure in filments is well observable.

4—Very small details in the filaments and chromospheric facule are visible over the entire solar disk. The chromospheric network is well visible. The solar limb is moving slightly.

3—Chromospheric network is visible over the entire solar disk. Spicules, just as the smaller filaments are visible. The shape of the chromospheric facuale is well visible. The solar limb is vibrating a bit, but this vibration is hardly noticeable in the umbrae.

1—Only the biggest and darkest filaments can be observed. Umbrae of the sunspots are not or hardly visible. The entire image is wavering.

Transparency also should be evaluated using the following scale:

2—Celestial background is dark, the prominences are distinct.

3—Celestial background is slightly bright, but the prominences are still distinct.

4—Celestial background is bright, the prominences can only be seen with difficulty.

The observer must provide a log for each observation on the drawing sheets with information that includes:

The record of observation for imaging is the same as for visual certification, except specifics of how the image was obtained should be provided. This includes:

Before setting up your equipment, you may want to see how the sun looks in hydrogen alpha light by checking out the GONG Network at http://gong.nso.edu where a global system of telescopes keeps constant vigil on the Sun with images and movie loops that are updated every minute.

Be sure to include your name, mailing address, email address, phone number, affiliated society, and to whom the certification should be sent.

Images in electronic format may be forwarded by any convenient means that accomplishes transfer or makes the images available for review. This may include mailing of a storage device such as a CD or flash drive, or posting the images on the internet. Please avoid sending prints or slides unless you do not want them back.

A certificate and pin will be mailed to the address provided, either to the observer or to a society officer for presentation.